The Four Types of Flower Bulbs

By definition, any plant that stores its complete life cycle in an underground storage structure is considered a bulb. But, as it turns out, there is much more to it! Did you know there are actually four types of bulbs? The four types of bulbs are true bulbs, corms, rhizomes and tubers.

True bulbs are identified by having a protective, scaly leaf shell called a tunic, and the inside grows in layers, like those you see inside an onion. The protective shell helps to keep the bulb moist before planting. One exception to this is the Lily. It must be kept moist before planting because it doesn’t have the protective scaly shell. True bulbs have what is called a basal stem at the base of the bulb where the roots grow. It also helps to hold the bulb together. True bulbs are generally rounded, grow vertically, and have a point at the top where the flower bud emerges. New bulbs, called offsets, form around the basal stem. True bulbs add new layers each year at the center of the bulb. The outer layers are used up each year so it generates new layers as it ages. Examples of true bulbs include Daffodils, Tulips, Lilies, and Alliums (onions are members of the Allium family). Below is a picture of the Drumstick Allium (Allium Sphaerocephalon) bulbs I planted. 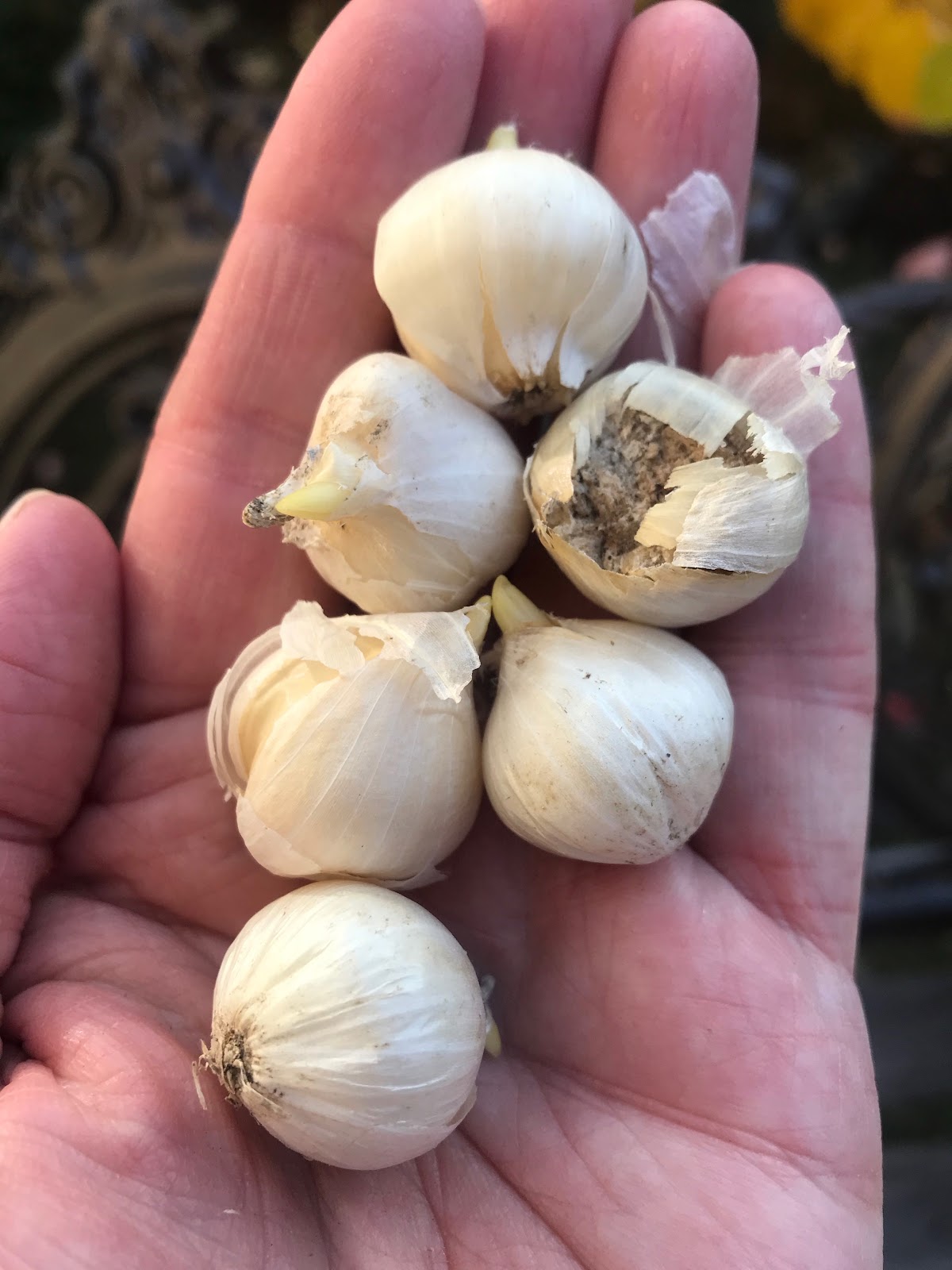 Corms are similar to true bulbs in that they have a basal stem and a tunic, but are solid inside instead of having layers like an onion. Like true bulbs they have a vertical growing orientation. Their shape tends to be a bit flatter than that of a true bulb. The energy in the mother corm is used up each year, and then a new corm(s) is formed to store the food during the dormant season to help the plant survive until the next growing season. Examples of corms include Crocosmia, Crocus, Gladiolus, and Freesia. Below is a picture of some Crocus (Crocus Vernus “Grand Maitre”) I planted. 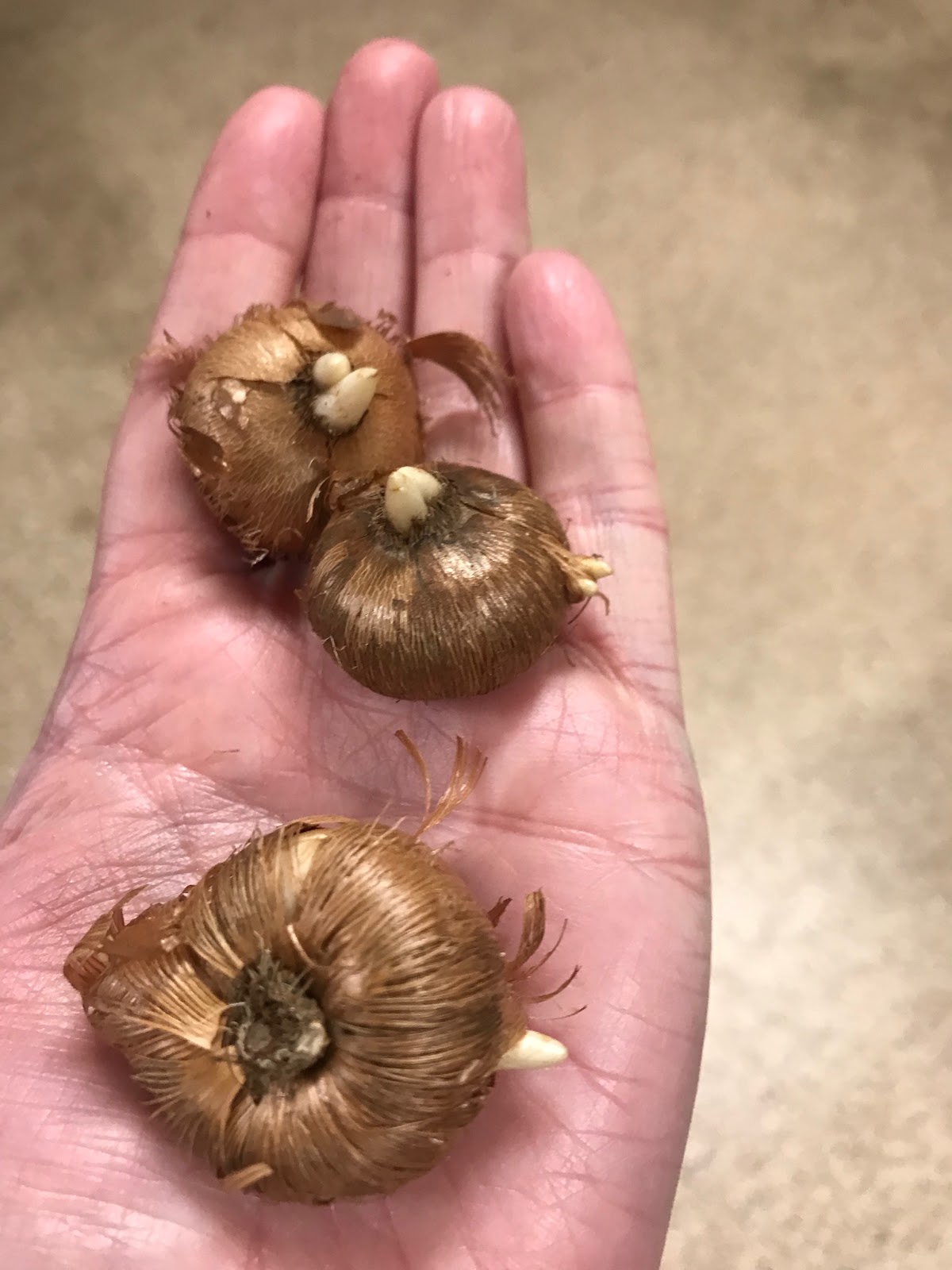 Rhizomes are underground stems that sprout plant growth. They grow sideways instead of upright and each rhizome develops its own roots. Rhizomatous colonies can become difficult to remove. Just a small piece of rhizome can sprout new growth and create a new colony. Rhizome examples include Iris, Canna, and Ginger. Below is a picture of a purple Iris start that my mother-in-law gave me. 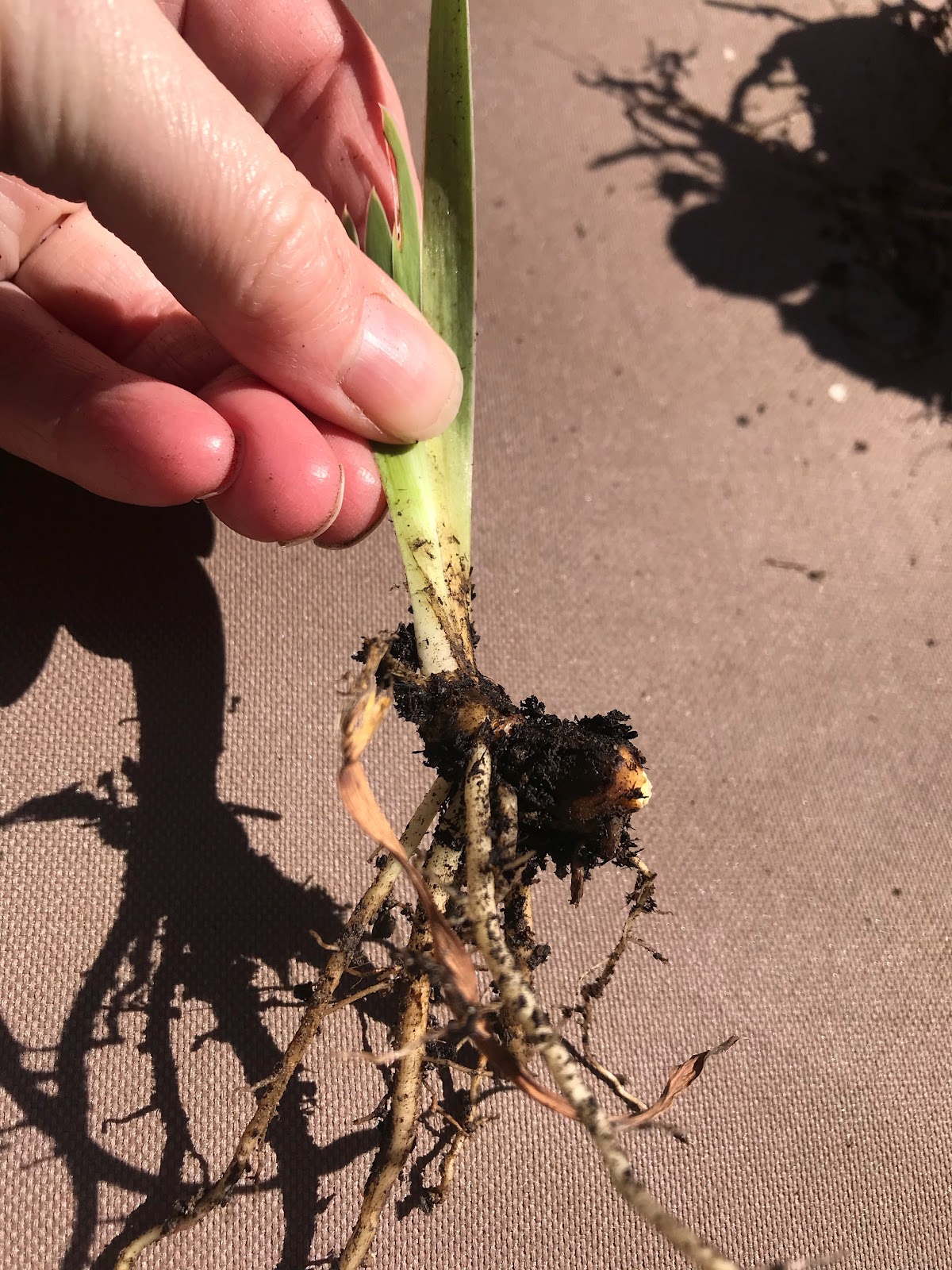 Tubers are split into two categories; tubers and tuberous roots. Tubers have no basal stem and no tunic. They root from the bottom of the tuber. They have several growing points called eyes. Because the eyes can be located in different areas of the tuber it can be difficult to tell which end is up or down. Tubers don’t produce offsets or new tubers. Instead, the tuber gets larger each year. The potato is a tuber. Other examples include Cyclamen and tuberous Begonia. Below is a picture of some Winter Aconite (Eranthis Hyemalis) tubers I planted this year. 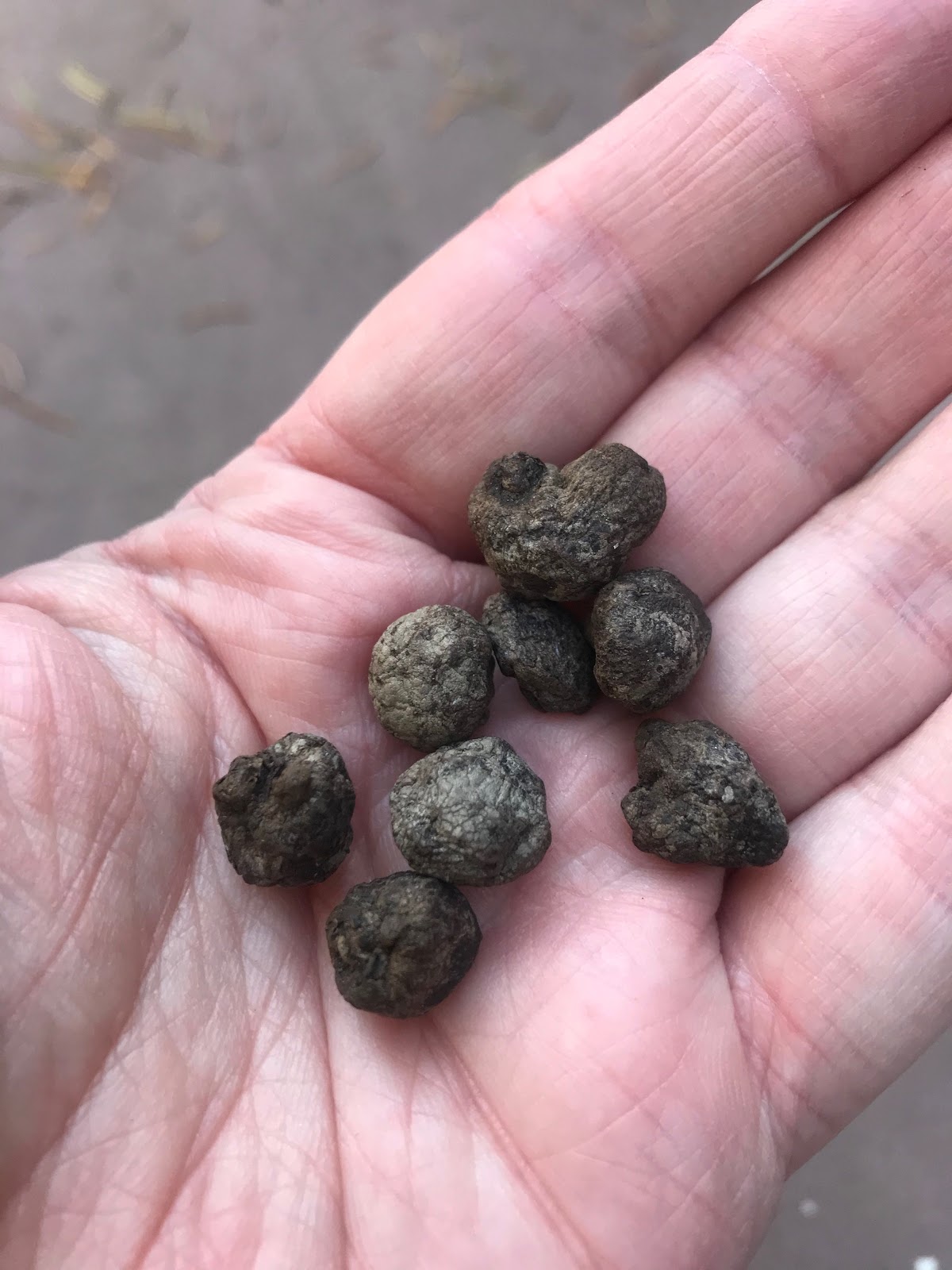 Tuberous roots join together at the base of the plant stem and store food for the growing season. In order to grow, the tuberous root must have the stem attached. It will not grow with only the root part. Examples of tuberous roots include Dahlia, Eremerus, and Daylilies. Below is a picture of a Dahlia (Dahlia “Mystic Illusion”) I dug up to overwinter inside, and a picture of a Foxtail Lily (Eremerus "Pinnochio") before it went into the ground. 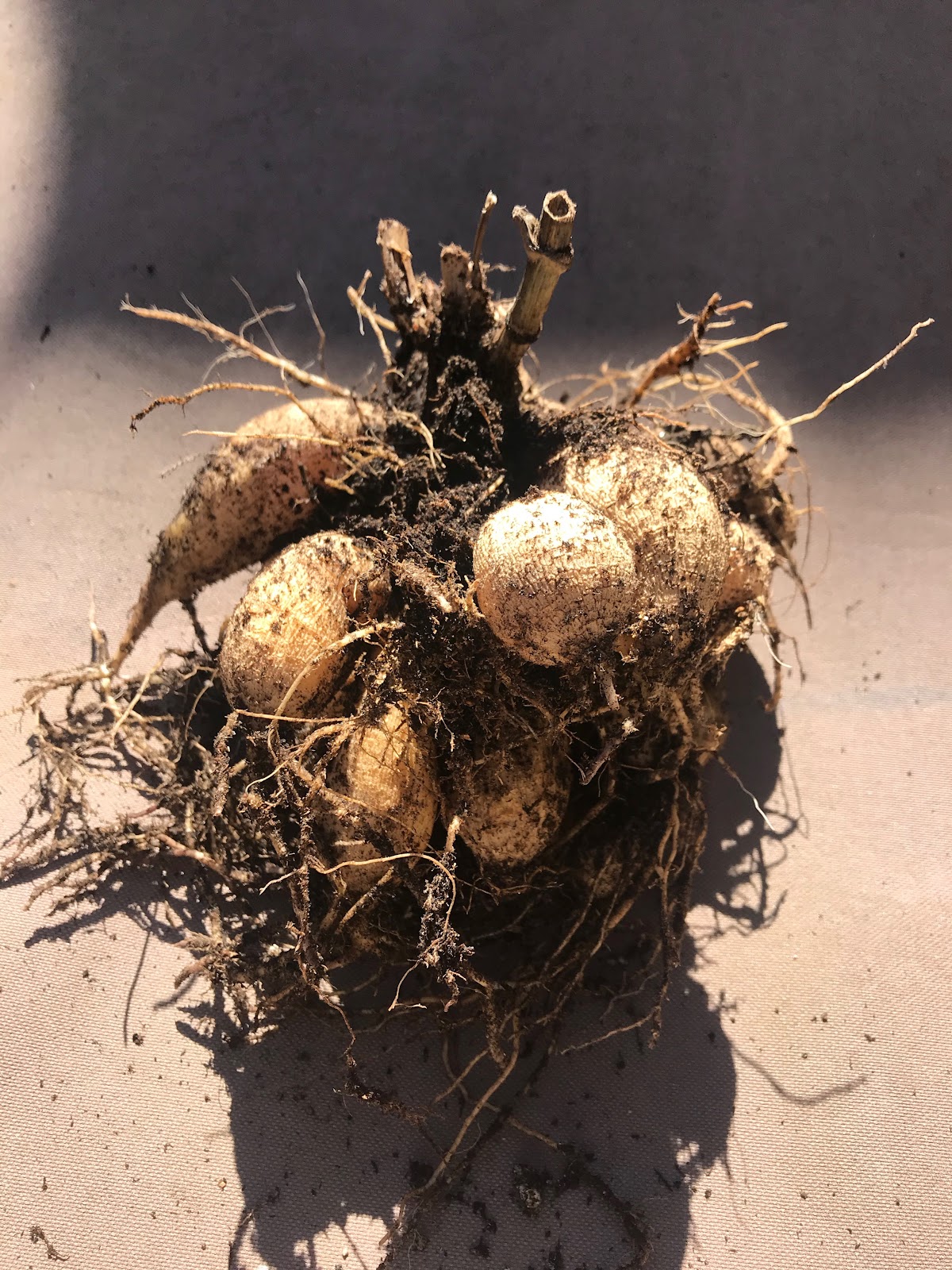 May Plant of the Month: Ceanothus thyrsiflorus

March Plant of the Month: Narcissus